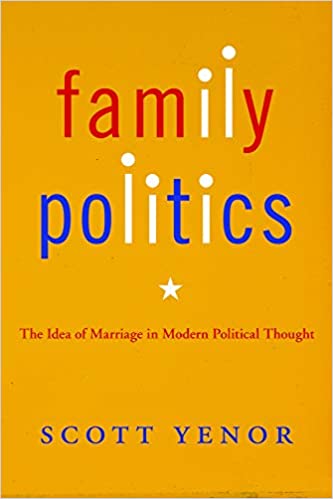 Family Politics: The Idea of Marriage in Modern Political Thought

“If an author is to be credited for wading into hotly contested waters with interpretations and arguments meant to invigorate an entirely new conversation about a perennial and perennially controversial topic, then Scott Yenor deserves a great deal of credit indeed.”

With crisp prose and intellectual fairness, Family Politics traces the treatment of the family in the philosophies of leading political thinkers of the modern world. What is family? What is marriage? In an effort to address contemporary society’s disputes over the meanings of these human social institutions, Scott Yenor carefully examines a roster of major and unexpected modern political philosophers–from Locke and Rousseau to Hegel and Marx to Freud and Beauvoir. He lucidly presents how these individuals developed an understanding of family in order to advance their goals of political and social reform. Through this exploration, Yenor unveils the effect of modern liberty on this foundational institution and argues that the quest to pursue individual autonomy has undermined the nature of marriage and jeopardizes its future.